Upcoming Presentation with CFUW Ottawa: Who was the Queen of the Hurricanes: The Fearless Elsie MacGill? 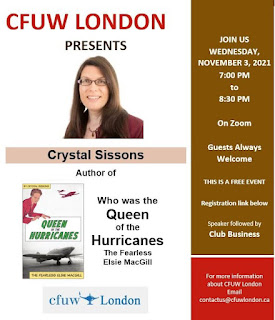 I am really excited to announce that on November 3rd, 2021 I will be doing a presentation for the Canadian Federation of University Women's London Club on Elsie. This presentation will focus on here wartime work and also on the creation of the book.
If you are interested in attending the event is both virtual and free. You can register here.
Looking forward to a wonderful evening!
Cheers,
Crystal
Posted by Crystal at 4:58 PM No comments:

Women in science, technology, engineer and math or STEM have met many challenges. There are a number of blockades that they encountered throughout their education and professional lives, with some disciplines being more problematic than others.

It took Elsie a long time to come to terms with the idea that there was discrimination within engineering, in part because she had never really stopped to assess her own experience. When she did, she realized that she had face discrimination and that she needed to advocated for women in this regard as well.

One thing that she was completely against was the idea that she was a "woman" engineer. She would make it quite clear to anyone who was surprised that she was an engineer that that was their problem not hers.

The United Nations declared 1975 International Women's Year (IWY). Elsie continued her feminist activism and used the momentum of this year to advance a number of her projects. She delivered speeches and encouraged women to seize the potential this year offered for women's advancement.

It was during this time that she really started to reflect on the challenges for women in engineering.

The Report of the Royal Commission on the Status of Women was tabled in 1970. It was considered in one media report to be a "bomb". Assessing the report today, there are many gaps that stand out, but when looking at it within its proper historical context, it was a revolutionary document.

Elsie spent an extensive amount of her time after the report was table to see its recommendations implemented. She gave speeches and worked with existing and new women's groups to advocate for the changes needed. She realized that the report was not the end of the work, only the beginning.

One issue that Elsie really championed during The Royal Commission on the Status of Women was a woman's right to abortion. While the RCSW was working abortion was illegal in Canada, and Elsie was against that. In the final report, she supported the recommendations regarding abortion, but took issue with the fact that they did not go far enough. She wanted to see abortion completely decriminalized and made a private matter between a woman and her doctor.

For more information on the context and issues around abortion in the 1960s see The Abortion Caravan by Karin Wells.

Elsie MacGill was interested in every aspect of The Royal Commission on the Status of Women, even the behind the scenes work required for its administration and coordination. Some of the issues that stood out for her included education. Specifically, she was concerned about women having opportunities to go as far as educationally possible. To do this, she realized that society needed to offer them better support, and provide models for them to emulate in textbooks etc.

Elsie would continue to advocate for the development of women's full potential throughout her life.

Elsie fact #25: The Royal Commission on the Status of Women (RCSW)

In 1967, the Government of Canada established The Royal Commission on the Status of Women (RCSW). Elsie MacGill was one of the commissioners selected to serve on this important commission. Why was she chosen? A number of reasons:

-she was a business and professional woman and could represent their voices,

-she was a self-declared feminist (the only one at the start of the commission),

-she had significant leadership experience in business and as a social activist, and

-she was originally from Vancouver, British Columbia providing some important regional representation.

The Report of the Royal Commission on the Status of Women was tabled in parliament in 1970, and it was was an extremely important document for its time. While it missed a lot of important aspects from our perspective today, and was even challenged by some of the commissioners who who helped produce it, within its proper historical context it represents an important aspect of Canadian social history.