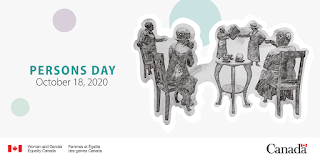 In Canada, October 18th is known as Persons Day. On this day in 1929, women in Canada won the right to be legaly recognized as "persons". As a result, they were accorded wider respect in Canadian society both legally and politically. For example, this ruling allowed for women to sit in the Canadian Senate.

The women associated with this ruling are known as the Famous Five and include: Emily Murphy, Nellie McClung, Louise McKinney, Irene Parlby and Henrietta Muir Edwards.

In 1929, Elsie MacGill graduated with her Masters degree in aeronautical engineering and came down with polio. She was momentarily stopped in her tracks in the midst of her engineering career. But the importance of this victory for Canadian women was not lost on her. She recognized it for the important social change that it represented and she would refer to it and the terminology ascribed to women throughout her actions as a prominent Canadian feminist.